Introducing “A Flood of Hope”… And Me

My name is Alexandra Hope Flood.  Everyone calls me Alix (like Alex, but with an “i”).  Welcome to my blog, “A Flood of Hope.”  The title, as you can see, is a play on my name.  It is also how I feel and what I would like to share.

I have been a professional writer for fifteen years.  I have written about many topics for magazines and the web (from pop culture, to music, humor, interviews, and reviews).  I was a staff writer for MTV.com during the dawn of TRL — it was also the dawn of the web (ah the dial-up days).  Before, during, and after my time at MTV, I began to write screenplays in my spare time.  The first script I wrote, I actually co-wrote with my mother, who is also a professional writer.  It’s a comedy loosely based on our experiences of moving to Brooklyn together after the death of my father when I was 25.  A few years later, ever hopeful, I wrote, co-produced, and directed a feature-length comedy,  A Totally Minor Motion Picture, about a lovable accountant in small town who hasn’t abandoned his dream of being a independent filmmaker. Currently, I am working on a book about living with a light perspective.

As you may have now discerned, throughout my career I have always been drawn to lighter subjects.  Or if the subject itself isn’t light (like the fallout from the death of my father), I am compelled to find the light in it.  Using the example of  first script, I took my personal loss and created a story with a hopeful outcome.  I have long known that I am built for Hope (capitalized lovingly herein for effect), but I only recently realized what a huge theme Hope is in my work and my life. It finally hit me that what I needed to write about was actually my nomenclature mandate.  Hence “A Flood of Hope” was sparked.

I would not say that delving into Hope is always an easy task during these times — the gut-wrenching catastrophe in Haiti sucks Hope to the mouth of a metaphoric Hell where it struggles to hang on.  Here, we struggle to hang on too.  Even if we are thousands of miles away from this horrific and heartbreaking tragedy, we are tested.  We may wonder, “In the midst of such abject devastation, will Hope ever return?”

The beauty of Hope is that it may wobble, but it never completely waivers.  Miraculously, life shows us again and again that the heart can break — yet hold onto Hope simultaneously.  When our eyes and minds are filled with grief, Hope patiently hangs around the back door waiting to be invited back inside.  Hope may seemingly step back during these difficult experiences, but it never truly departs us.
This is what I believe we must endeavor to remember.

I look forward to venturing further into Hope in future posts very soon.  Until then, thank you for reading! 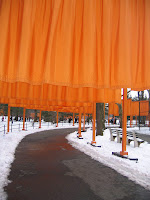