Please Give Us Back Our Day of Thanks 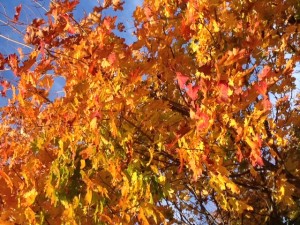 When I was a kid, I clearly recall that we didn’t hear a peep about Christmas until Santa Claus cruised down Broadway as the finale in the Macy’s Thanksgiving Day parade.

Every year, it was an exciting moment.

After Santa rounded onto 34th Street, we would have a wonderful meal and relax.

Then around December 1st or so, it would be time to start writing our letters to Mr. Claus, sucking on candy canes until they became peppermint shivs, and watching our favorite TV specials (Charlie Brown! Rankin & Bass!), which were a true viewing event.

I can still remember my father saying as we watched Santa appear on our TV screen in approximately 1975, “This is the official start of the Christmas Season.”

He used the word “official” because that was the general perception in those days.

Almost 40 years later, things are different, but by my estimation, not for the better.

My birthday is on November 12th, the day after Veteran’s Day. I think because I have a mid-November birthday I am perhaps more aware of how the holiday juggernaut has been inching up the calendar in recent years.

In the last ten years, I started to notice that retailers were already launching their holiday items on November 11th.

November 11th is a somber day of remembrance for those who fought and died for our country.

It’s not a day to be drinking out of a holiday-themed paper cup.

The first year I noticed this, I thought that the 11th of November seemed really early to be thinking about Christmas.

And I reflected with a chuckle that if I ran out into the street and started yelling “Merry Christmas!” George Bailey style, everyone would think I was a loon and call the cops.

Yet, stores have no compunction about rolling out the holiday carpet shamelessly early now.

A few years ago, I visited a certain pharmacy chain on Halloween Day because I realized my kids needed new loot bags, only to witness store employees putting Christmas items in the shelves.

Did I mention it was HALLOWEEN DAY?!

Here’s the thing American Retailers, we all know Christmas is coming. We don’t need you reminding us beginning on November 1st that it’s going to happen.

We are ALL in on the same schedule.

We ALL have calendars.

We ALL know exactly what’s going down at the end of December, whether we celebrate Christmas or not.

But all of this intense pressure so early in the year is starting to take its toll here.

But you’re completely bulldozing over Thanksgiving.

Like completely pushing it aside like it’s the less attractive chick you suddenly have to tolerate in order to get with her hotter roommate.

Now the lovely and heart-felt non-commercial Thanksgiving has been so stomped on by the jackboots of marketing, it feels like a mere inconvenient speed bump as you hurtle us toward the 25th of December.

I love Christmas, but not nearly as much as I used to because there are fewer opportunities to stumble upon its quiet magic anymore.

In the simplest terms, Christmas is a celebration of love, light, and miracles.

Not 50%-off sales, TV commercials, and lattes.

And I love Thanksgiving, a holiday about one of the most powerful forces for good in this world: gratitude.

As it happens, gratitude is the gateway to love, light, and miracles…

Just the way that Thanksgiving used to be the gateway to Christmas.

You see, to have a whole holiday dedicated toward acknowledging what we’re truly grateful for is heart-activating and miracle-making.

But we’re being hounded to skip this all important bit.

“Yeah, yeah, come on, eat your turkey and then break out your credit card!”

The Christmas pushers now want us out by midnight on Thanksgiving to start Black Friday, so we don’t even get a whole Thanksgiving Day anymore.

Nor do their poor employees.

I usually am not a ranter, but the holidays are starting to make me feel like I’m working for them, as opposed to celebrating their true meanings with my loved ones.

So my wish and hope for this year, and every year thereafter, is that retailers realize that they are way overstepping their boundaries and pull pack to a tasteful Miracle on 34th Street vibe.

Listen, for those of us that celebrate Christmas, we are still going to shop.

You don’t have to act so desperate for our attention.

Step away from the keg.

Here is an idea I’d love to see happen: why don’t you guys save your millions on holiday marketing and donate them to charity instead?

Think what good you could do in the world if those crazy amounts dollars which are normally spent reminding us unnecessarily that Christmas is coming — something we already know! — went to feed people, build houses, provide clean water, and cure diseases?

Not only would this activate the true meaning of Christmas, but we would probably love you all the more for it, and no doubt we’d be inspired to support your business — after we’ve had a chance to digest our Thanksgiving dinners.

Please give us back our Thanksgiving and we will give thanks to you.